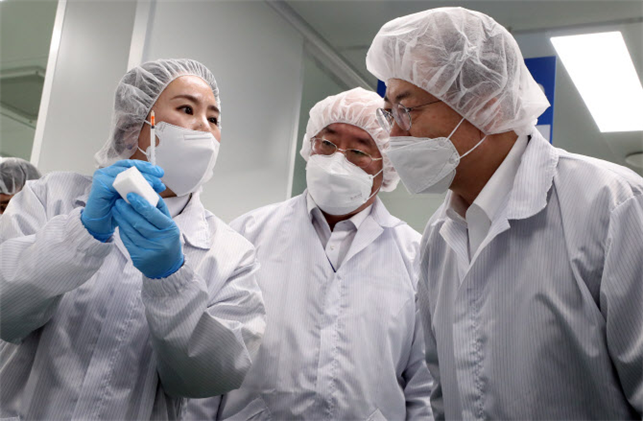 [E-Daily Reporter Ho-Joon Kim] Poonglim Pharmatech's Low Dead Volume (LDV) syringe for Corona 19 vaccination, which succeeded in mass production with the help of the government and Samsung Electronics, received European CE (Conformite Europeen Marking) certification. Following the approval of the US Food and Drug Administration (FDA) in February, the export route of syringes is expected to expand further as it also acquired European CE certification.

Poonglim Pharmatech said on the 17th that "the LDV syringe developed by the company yesterday (16th) for the corona19 vaccination received European CE certification."

Poonglim Pharmatech's LDV syringe is characterized by minimizing the amount of vaccine left in the syringe when administering drugs. When recently inoculated with this syringe in Korea, a maximum of 7 doses of Pfizer vaccine and a maximum of 11 to 12 doses of AstraZeneca vaccine are known.

This is because the injection remaining amount per minute is more than 84 microliters (μL) in general syringes, but Poonglim Pharmatech LDV syringes can be minimized to 4 μL. However, the quarantine authorities said that the increase in the number of vaccinations was not officially reviewed and left to the situation at the vaccination site.

Poonglim Pharmatech, which builds a system to mass-produce 20 million syringes per month this month, is currently discussing exports to more than 20 countries around the world, including the United States and Japan, with a global vaccine company. An official from Poonglim Pharmatech said, "Recently, inquiries regarding the export of LDV syringes are coming from European countries such as Sweden and France.“

It is reported that more than 140,000 units have been supplied to Korea, more than planned, as requests for additional quantities have poured out from several medical institutions that have recently confirmed the performance and quality of syringes.

Poonglim Pharmatech LDV syringes can be easily separated and discarded in the form of'Lure-Lock' (a device that prevents separation of syringes and needles), unlike existing products with a body and needle attached, and has a safety guard function to prevent puncture accidents. Equipped.

On the 3rd, Prime Minister Jeong Sye-gyun said to Na Sung-woong, deputy chief of the Centers for Disease Control and Prevention, “Think of using (Pungrim) Pharmatech (syringe) a little more. It is said that it is more elaborate.”

Earlier, Samsung Electronics and the Ministry of SMEs and Startups supported Poonglim Pharmatech to build a smart factory to mass-produce LDV syringes. Samsung Electronics added about 30 experts in its own manufacturing to improve syringe injection productivity by 5 times and support automatic assembly facilities. The SMEs helped the administration and funding through fast track procedures for quarantine products and a loan program exclusively for smart factories in the financial sector.