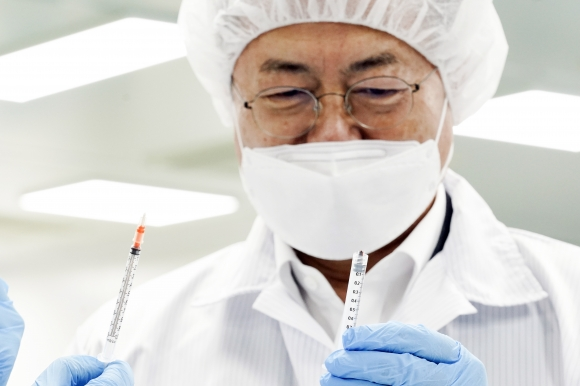 [Gyeongbuk Newspaper = Reporter Yoon Sang-won] President Moon Jae-in visited a company that produces'least residual type (LDS) syringes' for the corona 19 vaccination on the afternoon of the 18th. This is to encourage small and medium-sized enterprises (SMEs) that are reinforcing their K-quarantine status with syringes that have recently been inundated with export requests from all over the world.

The LDS syringe is a special syringe with a function that significantly reduces the loss of the remaining drug remaining in the syringe. With a regular syringe, you can only inject up to 5 doses per bottle of Corona 19 vaccine, but you can inject more than 6 doses with an LDS syringe.

Unlike countries that are struggling with securing LDS vaccine syringes, visits were scheduled to encourage small and medium-sized enterprises (SMEs) that are producing and supplying sufficient quantities of domestic technology. The Blue House explained, "It is aimed at encouraging innovative SMEs that are making efforts to overcome the crisis through exports.“

Poonglim Pharmatech, whose main business was to import and sell medical devices, recently changed its business direction and actively started to localize medical devices. In particular, in the corona 19 phase, it succeeded in developing an LDS vaccine syringe. It is reported that product purchase requests are inundated recently from over 20 countries around the world.

Behind these achievements, the Blue House explained that this schedule is of great significance in that cooperation from large companies has been added. Poonglim Pharmatech succeeded in developing vaccine syringe technology, but suffered from difficulties in prolonged production and mass production of prototypes.

At this time, with the support of Samsung Electronics and the government's smart factory support, the manufacturing process, which took at least one year from prototype to production, was greatly shortened to one month. Starting in February of this year, a production system of 10 million units per month was established, and a smart factory system capable of mass production of up to 20 million units per month from next month will be completed.

President Moon received a report of his plans to support vaccine syringe manufacturers from Kwon Chil-seung, Minister of Small and Medium Venture Business, and Kim Kang-rip, head of the Ministry of Food and Drug Safety. After that, we listened to LDS vaccine syringe production capabilities and domestic and overseas supply plans and recommendations from manufacturers.

The site schedule was attended by not only Poonglim Pharmatech, but also Shin-A Yanghaeng Co., Ltd., which is engaged in the production of LDS vaccine syringes, the management of Doowon Meditech Co., Ltd., production companies, and the Samsung Electronics Smart Factory Support Center, who helped to streamline the vaccine syringe production process.

The government is planning to supply the syringes developed by Poonglim Pharmatech to the rushing export volume, and to digest the domestic vaccination volume with syringes produced by San-A Corporation and Doowon Meditech.

In a closing remark, President Moon praised, "All three of us are very proud," and "The will and technology that our small and medium-sized enterprises have are very surprising and very proud.“

"If more quantities of the world's best minimum residual vaccine syringes produced by our three companies are produced to meet domestic demand and export more of the remaining supplies overseas, it will help the company to create sales and jobs. "I encouraged it.

In addition, he expected, "It will have the effect of showing off the technological level of the medical device industry to the world, and by playing a role in the production of about 20% of vaccines, it will make a great contribution to overcoming the corona crisis not only in Korea but also around the world." .

President Moon said, "The win-win cooperation between the large, small and medium-sized companies, as shown in the case of Poonglim, can be a very good model for us to achieve the independence of the small manager against Japanese export regulations." "Here is the secret to success for small and medium-sized businesses.“

President Moon said, "Our SMEs' achievements are great, but the process is more valuable. Behind the innovation achievements of Poonglim Pharmatech, there was a win-win cooperation between large companies, SMEs, and the government."

"Samsung first predicted that the demand for minimal residual syringes will increase, and by acknowledging Poonglim Pharmatech's technological prowess, it led the mass production of excellent products through all-round cooperation, such as supporting automation of production lines and mold technology."

In addition, he said, "Please do your best to provide the best support from the government level to the sites where large-scale, small- and medium-sized, and co-prosperous cooperation, including the Ministry of Small and Medium-sized Ventures, and the whole-of-government.